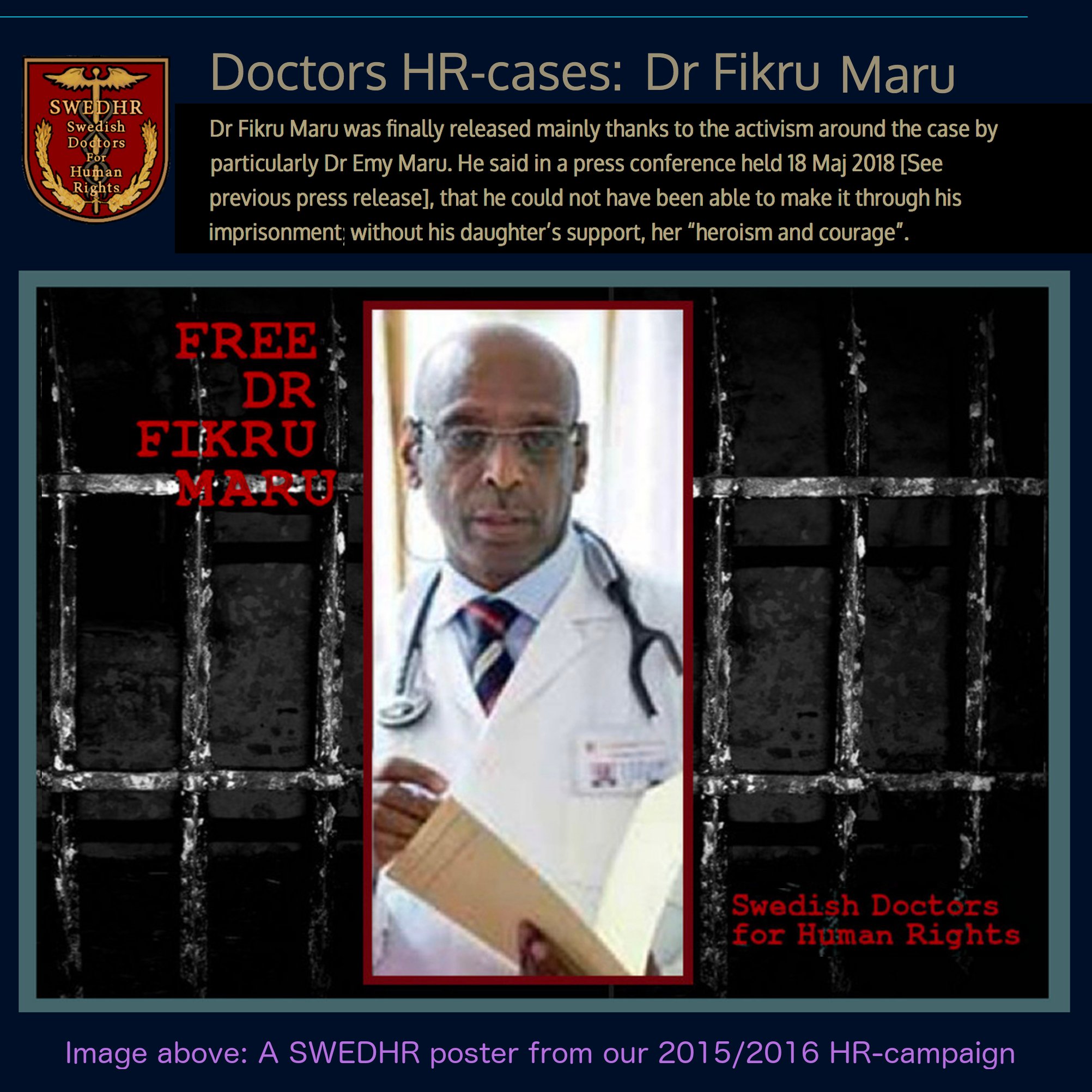 In an interview Dr Fikru Maru had with Svenska Dagbladet (SvD) published 28-05-18, he denounced that tens of prisoners –which were in the same Ethiopian prison were he was kept– had been killed during his time there.

Dr Fikru Maru was finally released mainly thanks to the activism around the case by family members, particularly Dr Emy Maru. He said in a press conference held 18 Maj 2018 [See previous press release], that he could not have been able to make it through his imprisonment without his daughter’s support, her “heroism and courage”.

On May 28, 2018, he declared in an interview done by Svenska Dagbladet (SvD) that tens of prisoners in the Ethiopian establishment he was held had been killed during his time there. The last of these cases in September 2016.

SWEDHR denounced already in 2015 the breaches on the human rights of Dr Fikru Maru’s case, who has been detained without trial for several years in Ethiopia. SWEDHR asked the applicability of art 9, paragraph 3, of the International Covenant on Civil and Political Rights by the United Nations.

After years arbitrarily detained in an Ethiopian prison, Dr. Fikru Maru is now free, and back in Sweden. In a press conference held today in Stockholm he was asked to whom he would thank for his release. He said, according to Aftonbladet:

“Whom shall I thank are the thousands Ethiopians which have died, lost parts of their bodies and belongings. They have fought for a regime change and got a new prime minister, and this government change has been determinant. Ethiopia is now placed in another position, just thanks to the people.”

At the same time, Dr Fikru Maru uttered criticism against the Swedish government. He declared:

“I realize that Sweden had put my case [on hold], archived in a shelve.”

SWEDHR denounced already in 2015 the breaches on the human rights of Dr Fikru Maru’s case, who has been detained without trial for several years in Ethiopia. SWEDHR asked the applicability of art 9, paragraph 3, of the International Covenant on Civil and Political Rights by the United Nations. 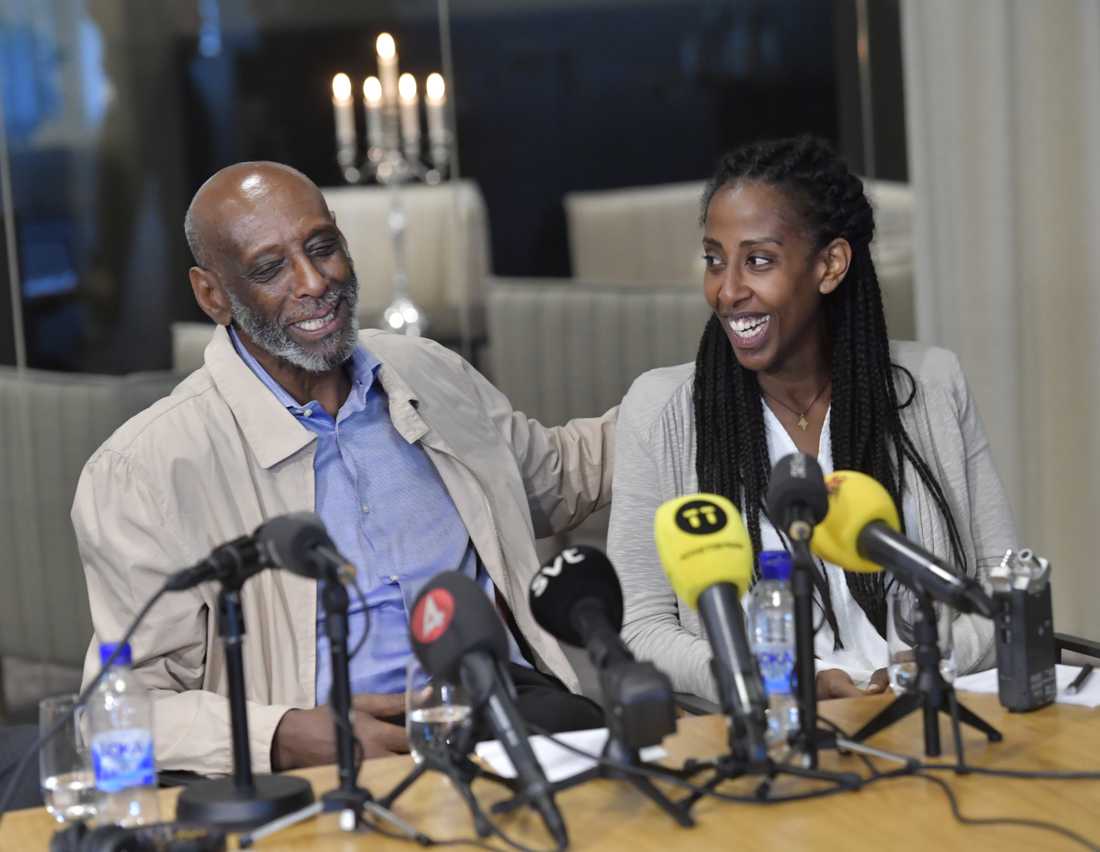 Dr Emy Maru informed that the Ethiopian judicial authorities managing the case of Dr Fikru Maru have postponed a verdict on the case until 20th of April.

A committee with the name Action Group Justice for Fikkru Maru has been set to joint SWEDHR campaign towards a fair treatment of the Fikru Maru case in Ethiopia. One action consists in the sending of posts-cards (see image below) to the Ethiopian authorities through the Embassy in Stockholm. Hälsinge newspapers have printed the postcard facsimile to contribute to the campaign. Contact person at the committee Aktionsgruppen för Fikru Marus Rättvisa, Hudiksvall, is Margareta Sidenvall.

24 March 2015 – After the hearing in Ethiopia went in favour on behalf of Dr Fikru Maru, his lawyers requested the case should be dismissed. The prosecutors, however, appealed this request on the 20th of March. On the 7th of April, the judges will give their verdict on the request for dismissal.

What are the likelihoods for a positive ruling? SWEDHR has asked Dr Emy Maru, daughter of the Swedish cardiologist-surgeon who has been imprisoned 23 months before taken to a hearing on the 9 of March 2015. Dr Emy Maru replies:

“The expected outcome for the verdict of April 7th doesn’t look bright.“ “To the best of my knowledge, the judges have never ruled against the prosecution, and they won’t in this matter either.”

She adds that now it is “more crucial than ever” to keep the pressure on the authorities towards a fair management of the case, and the respect of Dr Fikru Maru’s human rights.

Dr Fikru Maru has been imprisoned over 24 months in Ethiopia. During 23 months without being heard at any court of justice or legal proceedings taken about the case. 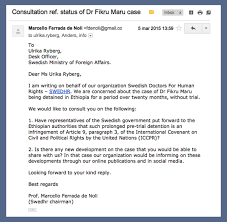 Swedish doctor Fikru Maru been imprisoned in Ethiopia without trial